Click on the image to download the pdf of the information leaflet on IQUA and the Quaternary. 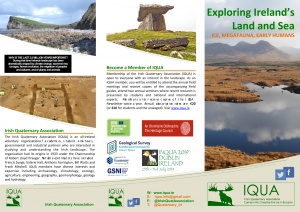 WHAT IS THE QUATERNARY?

Quaternary studies relate to the Quaternary period in the geological time scale. This is the shortest and most recent geological period covering the last 2 million years of the Earth’s history, right up to the present day. The Quaternary is in the Cenozoic era and is generally broken into two epochs, the Pleistocene (from about 2 million years ago to ten thousand years ago) and the Holocene (from 10,000 BP to the present day). The Quaternary period has been marked by repeated glaciations on large tracts of the Northern Hemisphere which are today ice free. Thus it includes what is popularly termed the Ice Age. Ireland was covered by thick glacial ice on at least two separate occasions during the Quaternary. The action of the ice sheets put the final shape on the Irish landscape. It also provided the parent material for more than 90% of our mineral soils covering much of the bedrock surface with up to 50m in thickness of tills (“boulder clay”) and gravels. During the subsequent Postglacial (Holocene) stage other processes contributed to shaping the landscape. The great raised bogs of the Midlands and the blanket bogs of the mountains and Atlantic seaboard developed. Coastal processes gave us beaches, spits, tombolos, salt marshes and estuarine muds. As well as extraordinary climate changes through out the world, the Quaternary period has also been characterised by the evolution and global migration of hominids.

WHY STUDY THE QUATERNARY?

The Quaternary is the geological period which most directly influences our day-to-day living. Its deposits cover more than 90% of the land surface of Ireland and are therefore the most important and most immediate of all the geological deposits in Ireland. Almost all major engineering works therefore encounter Quaternary deposits. All our sands and gravels are supplied from Quaternary deposits and all Irish soils including peatlands are Quaternary in age. Quaternary deposits often provide good groundwater and can offer protection from pollution to groundwater in underlying sediments and bedrock. Detailed investigations of Quaternary deposits provide reconstructions of past environments and chart changes over time. This approach is used to predict the impact of future changes in factors such as climate, sea level and land use on our environment. The unique elements of the Irish flora and fauna can only be adequately explained in terms of the history of their distribution.

HISTORY OF QUATERNARY RESEARCH IN IRELAND

The Royal Irish Academy (RIA) Committee for Quaternary Research in Ireland was established in 1934, providing a key stimulus for the study of Ireland’s Quaternary history. In the 1970s, the Irish Quaternary Association (IQUA) was founded with a view to co-ordinating and energising all aspects of Quaternary research in Ireland and passing on existing expertise through conferences and especially field excursions. Notable contributors at the time included Frank Mitchell, Francis Synge, Alan Smith, Bill Watts, Marshall McCabe and Willie Warren. The INQUA Congress held in Birmingham in 1977, which included excursions to Ireland led by Watts and Synge, gave a further impetus to Quaternary studies in Ireland. Frank Mitchell, as President of INQUA for the intercongress period 1969–1973, and later through his classic book, Reading the Irish Landscape, also greatly helped in highlighting the multi-dimensional character of the Quaternary in Ireland. The link between the RIA and INQUA continues to be positively fostered by active Quaternary scientists represented via the RIA’s Geoscience Committee (formerly the National Committee for Geology), and by funding IQUA’s national delegates to attend INQUA congresses. Furthermore, the recipient of IQUA’s inaugural Frank Mitchell Award for Distinguished Service to Quaternary Research and Teaching, Pete Coxon, has served as both IQUA President (2008-2012) and as Secretary-General of INQUA (2003-2011), thus strengthening the link between IQUA and INQUA.

Currently, IQUA has well over 100 members and disseminates information about its activities through its webpage and email list. IQUA hosts at least two symposia and one field-based meeting each year. The Spring Meeting invites presentations on any area of new or ongoing research of interest to Quaternary scientists, particularly from current postgraduate students, and is followed by the Annual General Meeting of the Association. IQUA’s Annual Symposium is held in late November. This is a thematic one-day meeting to which we invite keynote speakers from home and abroad, attracting an audience of 80-100 people. Emphasis is placed on multi-disciplinary approaches so that there is always something of interest for the wide range of disciplines – geomorphology, palaeoecology, archaeology, amongst others – that IQUA serves. Recent themes include: ‘Lakes: Reflections of our Past’ (2014), ‘Dating the Quaternary’ (2013), and ‘Remote Sensing: applications in Quaternary science, archaeology and landscape management’. Annual IQUA field meetings, held in various parts of the country over the last 40 years, have been especially popular. Most field guides published for these meetings are available in hard copy and as pdfs on the IQUA website. Joint fieldtrips with IQUA’s sister organisation in the UK, the Quaternary Research Association, have also taken place in recent years; a joint IQUA/QRA trip to south-east Ireland was held in September 2015. In one of our outreach activities, IQUA ran a highly successful fieldtrip entitled ‘Wicklow in the Grip of an Ice Age’, as part of the Dublin City of Science programme in 2012. This trip is now self-guided, through its accompanying field guide.

Ireland’s Pleistocene and Holocene sediments preserve a rich archive of the island’s climatic, ecological, and human history. The widespread peat cover and numerous lakes have yielded almost 500 pollen records (www.ipol.ie), including some of the earliest pollen stratigraphic investigations in Europe, undertaken in the 1930s by the Danish botanist and geologist, Knud Jessen, working with the pioneering Irish scientists Robert Lloyd Praeger, Anthony Farrington and Frank Mitchell. An active area of current research is the mapping of diverse landforms to infer the extent and pattern of ice-sheet dynamics during and after the LGM. Other key questions relate to the influence of the Atlantic Ocean, especially during Heinrich events, the role of tidewater glacier margins, and the precise nature and timing of deglaciation. Research at QUB plays a globally significant role in dendrochronology and radiocarbon geochronology, including collation of the IntCal radiocarbon calibration. Icelandic tephras in Irish peat sequences allow precise correlation of past events across NW Europe, and a wider understanding of regional climate dynamics. Furthermore, Ireland’s superb archaeology provides an unparalleled resource at a European level in terms of its resolution and chronology. Significant archaeological activities have taken place in advance of major infrastructure schemes during Ireland’s recent Celtic Tiger expansion, which led to an abundance of high-quality research output, thus adding to our knowledge of Ireland’s rich archaeological history.